The round table in Slavonski Brod 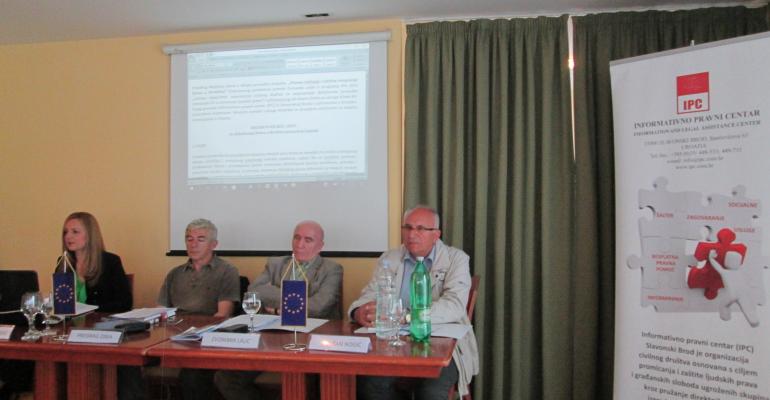 The round table, as final activity within the "Legal inclusion and sustainable integration of Roma in Croatia" project, was held in the premises of hotel Savus in Slavonski Brod on 3rd May 2017.

The round table was attended by regional government, public institutions, CSOs and elected national minority representatives from Slavonski Brod and Brod-Posavina County.

In her opening speech, IPC’s Executive Director Natasa Kovacevic welcomed all the participants  and briefly described project activities that were implemented in 6 Croatian counties and thanks to which the number of stateless persons and persons at risk of statelessness was reduced. She additionally enumerated achieved project results and presented speakers at the roundtable: Professor Zima, Mr. Nogic and professor Lauc.

Professor Predrag Zima presented the Action Plan for Roma Inclusion in Brod-Posavina County which was adopted on 10 April 2017  on the 25th County Assembly session and published in the Official Journal of No.7/2017. Professor stressed that the Action Plan identifies the key issues and priorities of the Roma community in Brod-Posavina County and that it is not a product of an individual but that it represents coordinated co-operation of everybody included in the process. The first issue in preparing the Action Plan is planning which is usually ignored, and the other issue is that it is not a legal but a political act created by all the participants, therefore a synergy between local, county and national authorities is needed in order to produce such document. The goals and methods of the Action Plan are aimed at the systematic communication and better informing of Roma population and at the communication between the authorities and Roma representatives because the objectives of the Action Plan can be realized only  by the mutual cooperation of the whole community.

Mr. Dusan Nogic, president of the newly established Coordination of Councils and Representatives of National Minorities in Brod-Posavina County, presented the purpose of the Coordination which will propose measures to the County, city and municipal authorities in order to improve the position of national minorities. He emphasised that the Coordination is founded according to the Constitutional Act on the Rights of National Minorities and that it’s fundamental goal is advocating  for full realization of human rights, which is challenging and requires committed work.

He further emphasized that according to the claims made by the representatives of national minorities, the number of national minority members in Croatia is much higher than stated in  2011 Population census, which is reflected in the possibility of minorities to realize their rights in education, housing, culture and other  areas.

As a conclusion, he stated that human rights standard in Brod-Posavina County is at the same level as the standard achieved in the whole country and expressed his satisfaction for the opportunity to participate in the project.